The Scariest Person in My Childhood

Who was it? That was the question the writing prompt asked, suggesting I write one page. I didn’t have to think about it for long. The scariest person I can remember was actually two persons. 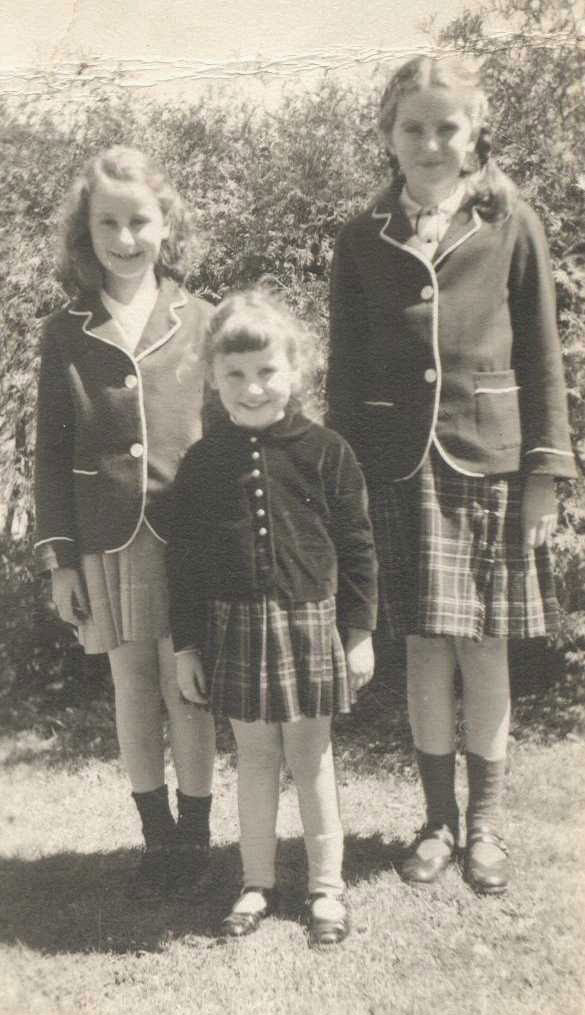 Taken at our house along the Richelieu. Myself, my younger sister, and my older sister.

On the corner of the lane that ran behind the houses on our street was the home of the cross-eyed boys. At least, that’s how my sister and I referred to them (but only to each other, of course). Was it just one of them whose eyes were crossed? Or were they both similarly afflicted?

Adding to their mystic was their mother, who operated the wringer washing machine on their back porch, scowling at us with suspicion whenever we passed, and whose left arm had been mysteriously amputated above the elbow.

My older sister and I walked to school together every morning, with no problem. But if she was staying after school to play ball or going in the other direction with her friends, I had to walk home alone. There was no way to avoid the big clapboard house that occupied a corner on the side street that I had to take in order to reach either the lane that ended at our backyard or Richelieu Road that passed our front hedge.

The school the boys went to must have finished each day before our final bell rang, because invariably the brothers would be lying in wait for me. They’d dash across their yard, screeching to a stop within inches of my terrified person, jumping up and down and hurling curses in their native French-Canadian while I scurried past, looking straight ahead, the back of my neck feeling the heat of their scorn. I was sure it was only a matter of time before they grabbed me. It never occurred to my nine-year-old self that it was all an act.

Not content in knowing that this skinny English-speaking girl was deathly afraid of them, one afternoon they enhanced their performance to include spitting. Luckily for me, their mother was on the porch, threading wet clothes through the wringer. “Ici,” she shouted. “Vite!”

All three of us came to attention, and the boys slunk back across the stony yard. Maman tromped down the steps, grabbed the boys and held them to her with her one good arm. Then she twisted the ear of first one and then the other, till they shrieked in pain and batted her off.

By this time I’d escaped. But now I had to worry what special sort of revenge I was in for next time.