My Review of Ringing the Changes, by Mazo de la Roche

I recently wrote a review of the new edition of Canadian writer Mazo de la Roche’s autobiography for the publisher, Dundurn Press. They ran it on their blog earlier this month.

I first started reading de la Roche’s Jalna series after taking The Whiteoaks of Jalna in Grade 10 English Lit. class. I was hooked! 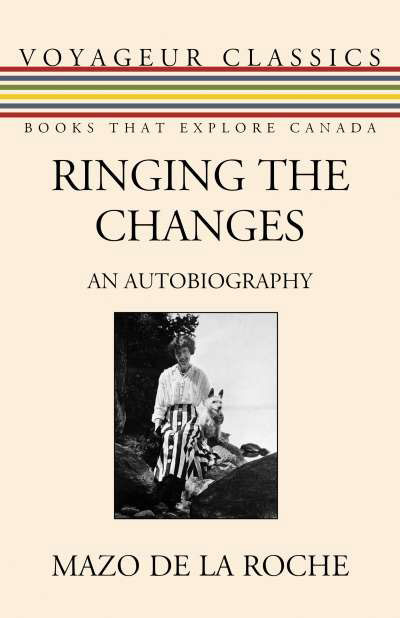 The new edition of Mazo de la Roche’s autobiography, Ringing the Changes, is enhanced by Heather Kirk’s well-documented introduction. It answers a number of questions and provides dates for many events; de la Roche told the things she thought important.

Her autobiography might have been easier to write, the author contends, if her forebears had been other than “distinguished-looking nobodies.” This is typical of her ability to laugh at herself; her sense of humour is evident throughout. Written by a novelist, the book is filled with intriguing characters and dramatic scenes.

The story begins with the arrival of Mazo’s young cousin, Caroline Clement, as part of the household in Newmarket, Ontario. The two little girls become lifelong companions.

Both children are artistically inclined; Caroline plays several musical instruments, and Mazo says she herself was born to write. She tells of an idyllic childhood. Her father, though often absent from home, was a reader, a dog-lover, sensitive yet enthusiastic, a man who doted on his young daughter. Her vivid description of her agony over his death is heartrending.

Mazo, “an eternal sketcher”, attended the Ontario School for Art for a time and took some lectures at university. She wrote her first successful story longhand and in pencil. It was accepted by Munsey’s Magazine and Mazo was paid $50.

As well as having her own job, Caroline was Mazo’s secretary, taking dictation, making travel arrangements for their many trips abroad, and often going house-hunting for the pair.

Throughout her life Mazo de la Roche suffered from “illness of the nerves”, sometimes losing her ability to write. She insisted on seclusion, and at the end of WWI had a cottage built in the woods. At Trail Cottage she was inspired to write Jalna, the book that won her the prestigious Atlantic Monthly prize.

Ill health continued to plague her. Once they were better off financially, Caroline was able to quit work and stay home with Mazo. She found joy in writing again, especially the stories of the Whiteoak family of Jalna.

She and Caroline travelled extensively, falling in love with the English countryside and renting houses in Devon and Cornwall. But they always found themselves longing for Canada. In 1931 Mazo adopted a little girl and a baby boy, and together they returned to Devon. Mazo enjoyed visits to London and meeting other writers. Eventually, they took a house just around the corner from Buckingham Palace. Still, Canada beckoned.

They returned to Erindale, a few miles from Trail Cottage. When they heard that de la Roche’s book Whiteoaks was to be produced as a play in London, they went back to England again. RKO made her novel Jalna into a Hollywood movie.

De la Roche was an indulgent parent, providing her two children with nannies and governesses. The household included a cook, a parlour maid, a gardener, and a chauffeur.

In 1938 in Toronto, she received the Lorne Pierce Medal, presented by the Royal Society of Canada for distinguished service to Canadian Literature.

After surgery to remove a cyst from her throat she returned to Vale House to recuperate. But the threat of war and the fact that they lived dangerously close to London made them return to Canada and a house near the village of Thornhill. There, in 1939 de la Roche finished her autobiography, saying she had no urge to write about life after the war. One wishes that she had.

Mazo de la Roche was seventy-five at the time. Over her lifetime she wrote a total of thirty-seven books, sixteen in the beloved Whiteoak family saga. She and Caroline lived in the Thornhill house for many years. Mazo de la Roche died in 1961.